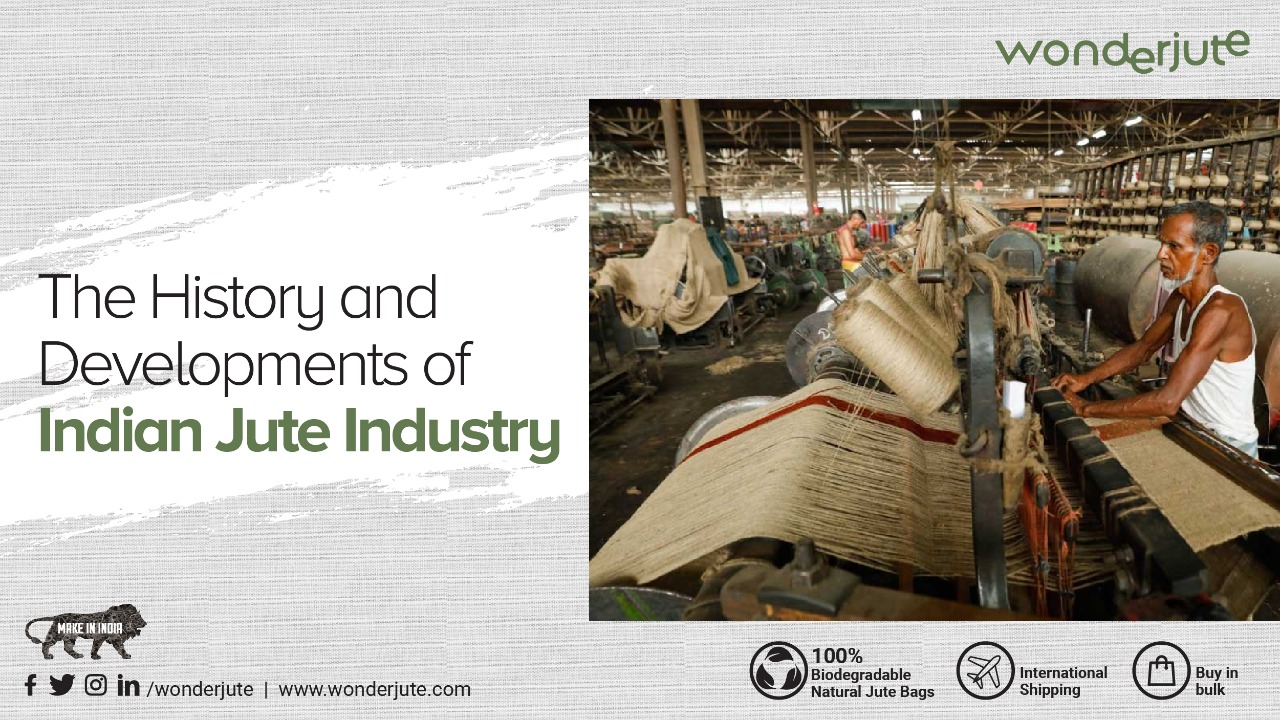 A naturally grown, eco-friendly golden colored fiber, jute is native to India and Bangladesh. Owing to its color and shine, it is popularly known as the ‘Golden fiber’. Its tensile strength, breathability and versatility as a fabric makes it a popular choice for making bags and other packaging materials. Jute remains the second most important vegetable fiber after cotton. Its environmental benefits are noteworthy and most countries are turning to jute as a sustainable alternative.

Insights into the history of this industry

Eastern part of India, West Bengal had the most jute growing farmers and owing to its proximity to the sea it was a convenient location to export. By the year 1869, the jute industry saw rapid growth and there were 5 mills and over 950 looms. After partition in 1947, while all the mills remained in India, most of the jute producing land belonged to East Pakistan. Due to the political tension, import of raw jute was banned. Thus India had to become self-sufficient in jute production. Over the past 150 years the industry has expanded and diversified and the mills in India have proven their ability to meet the jute demands of the world. Out of the 77 composite jute mills in India, 60 are located in West Bengal.

Despite being challenged by several alternative and man-made fibers, jute today has regained its popularity due to its environmental benefits.

The cultivation of Jute

Jute is a rain fed crop well suited for tropical countries such as Thailand, India and Bangladesh. The jute crop requires 4-5 months and is then rotated with food crops. Jute cultivation has been shown to be beneficial for the growth of crops in the next season. It is not resource intense and does not require heavy irrigation or pesticides. For growing economies like India, jute is an ideal cash crop since it gives high yields in relatively less land. Jute cultivation now is expanding to other regions of the country such as Andhra Pradesh, Uttar Pradesh, Bihar etc. As of 2016, India had a share of 52% in the world’s jute production.

However, it must be noted that processing jute requires a lot of water and rain. Hence monsoon fed regions are ideal for cultivation and processing. Jute processing is a specialized industry and it involves several steps and is labor intensive. Thus the jute industry provides employment to many in the regions it is cultivated and happens to be a key player in the Indian textile industry.

Size of the Indian Jute industry

Jute occupies an important place in India, predominantly, in the eastern part of the country where it is most cultivated. India is the world’s largest producer and consumer of jute. Jute production includes not just its cultivation, but also its processing, spinning, weaving, dyeing and producing finished products. Thus this industry is a key employer in the Indian economy, providing work for over 40 lakh farm families, 2.6 lakh industrial workers and 1.4 lakh in the tertiary sector. The Indian Jute industry is ever growing and expanding to make a wide range of consumer products, including clothing, carpets, interior decorations etc. In India, jute plays a key role in the economy providing livelihoods for many.

Jute production is given special attention by the government of India. The National Jute policy formed in 2005 has played a major role in the standing India has achieved in the global jute market. Fixing a minimum support price for raw jute has ensured farmers’ remuneration. The initiatives have also strengthened the R&D efforts in the sector. Further in 2008, the National Jute Board act was passed and the board serves as an apex body to regulate cultivation, manufacturing and marketing of jute and jute products. To bolster the Research, the Jute Technology Mission was set up to modernize, upgrade and diversify the jute industry. These programs have helped poverty alleviation, improved employment opportunities and considerably improved domestic and export earnings.

Sacking is the most traditional use of Jute. However, jute is a very versatile fiber and can be transformed to a variety of products. Besides its use in packaging, it is also being explored for clothing, to make twine and ropes, and even for wood. Research has also shown that raw jute pulp can be employed in making paper, saving millions of trees. With its impressive eco-friendly nature, it has multiple uses and scope for revenue generation.

India started exporting jute in the 1800’s and enjoys a historical advantage in the jute export market. Globally with increase in environmental concern, jute is becoming a sought after alternative for packing and bags. Significant strides have been made in enhancing the quality and strength of the fiber. Thus the output of export yarn has grown. Further with increase in price of synthetic substitutes, the export industry holds a lot of promise.

Yarn and twine are the most common purposes for export. The exported yarns are usually transformed into carpets in Europe and the middle east. The remaining products take a small percentage of jute export. The major export markets are in the USA and Europe. India has shown significant improvement in exports of Jute Diversified Products (JDP) as well. Although India is the leading producer of jute, is one of the largest consumers of jute too. Thus it is the second largest exporter after Bangladesh and currently India exports worth Rs.1000 crore annually.

Socio-economically jute plays an important role both as a key player in the export market as well as providing livelihood and employment for millions of small and marginal farmers.

The domestic and export market of jute in India holds a promising future with many programs supporting jute products and promoting it as an environmentally sustainable alternative.